Don was aware that there was a missing dog in the area so he went to check whether he could find him there. Sure enough, he did find a dog, stranded by: freezing water on all sides. Don yelled out to the passerby visitors of the park to call 911, but then again he knew that by the time help arrived, the little pooch would probably not make it. So, he had to act fast!

Without hesitation – Don decided to go in and save the dog himself. He broke the ice, with his forearm, and went waist-deep into the icy waters on the rescue mission. He then managed to hold the dog near his chest and crawl back to the shore as fast as possible. 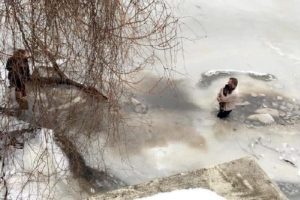 The dog named: Jackson was a Terrier mix breed. As soon as the pair was out of the water, the dog was taken to the vet to check if everything was okay.

Vets claimed that Jackson was with them there alive and well because of Don’s heroic behavior and fast thinking. The dog’s owner too was really happy to reunite with his little- family member. 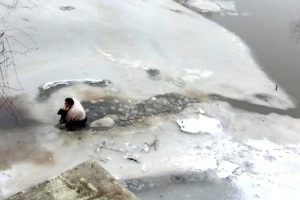 Locals – are praising Don for his heroic behavior but he claims that it was all the dog’s deed for it was the dog who cried for help, having sensed danger.

We wish there were more: Dons out there in the world to help animals in need.