The life of a Shiba Inu puppy, named Taka, almost ended in a fire. Last week, the eight-year-old dog was staying inside the porch when his home started to burn. At that time, his owners were out, and when they were informed of the fire, they couldn’t get to him in time.

Fortunately, Taka was able to escape the porch on his own and started searching for help on the street. He ended up being spotted by a neighbor who rushed him to Care More Animal Hospital in Martinez, Georgia.

The vet was shocked at how bad Taka was suffering. He had injuries around his eyes, mouth, ears, belly. The dog was crying in pain and extreme panic. Veterinarian Emily Martin, who took over Taka’s case, shared:

“He had burns all over his face, jaws, ears, and tummy. At first, we weren’t sure how serious his injuries were because inhalation burns were a worry.” 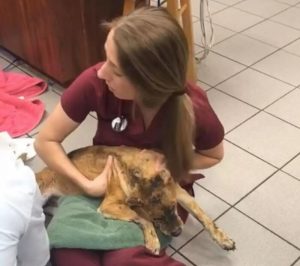 Sadly, Taka’s eyes had to be removed because they were severely damaged in the fire. Several days later, the vet’s staff sent the dog to the University of Georgia clinic after he showed off some respiratory issues. There, he was applied to an oxygen machine for several days before he was finally moved back to Care More Animal Hospital.

Everyone was all trying their best to save Taka, but Martin seemed to have a special love for the dog.

“I try to treat my patients all the same, but his case pulled at my heartstrings a bit more,” Martin recalled. “When he came in, he was screaming from pain … but he calmed down the moment I sat with him and started singing to him.”

After Taka returned to the vet, Martin contacted his family, and they decided to surrender him to Martin’s supervision because of his heath. That was when Martin started becoming more than Taka’s vet. She was his mom. She soon became attached to the dog during working hours. Even when the vet had to be closed at night, she decided to take him home.

Talking about the reason why she really cherished the dog, Martin shared: “He doesn’t have a mean bone in his body. A lot of times when animals are in pain, they’ll start biting just because they hurt, but he hasn’t once tried to bite. If anything, he’s comforted by people.”

Taka is recovering quickly, and his personality starts to come out. He likes belly rubs and cuddles. He is a huge food lover. Martin is very happy to meet Taka every day when she goes to work. However, in a long run, she thinks he had better find a new family who can provide him individual care.

Best wishes to Martin and Taka.