It says you cannot choose a dog to be your companion, it’s the dog who chooses its human soulmate. And there isn’t better proof of it than this heartwarming story!

A few years ago, Dion Leonard, an extreme marathon runner from Scotland was among the participants at the Gobi March race, a 155-mile marathon through China’s largest desert. A competitive spirit, Dion was hoping to win the tough marathon. However, what he never knew is that he was about to meet his newest lifetime friend. 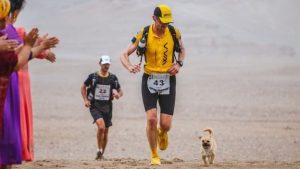 It was day one of the six days marathons and after the first 22 miles, Dion noticed that an unusual competitor has decided to join the race and win his heart once and for all. But at some point, the four-legged runner disappeared from Dion’s sight. However, it didn’t take too long until they’ve seen again. In the camp, this time. Here, the Scottish found out the little one was a homeless puppy. Focused on the race, Dion didn’t give too much attention to the dog. Only to find out, the next day she was there, too, at the start. 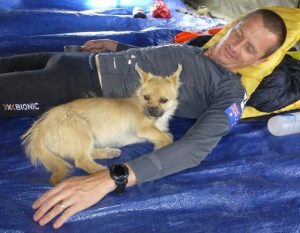 “On Day 2, I was at the start line for the race stage and she was standing next to me looking up at me,” Dion said. “I thought to myself this little dog isn’t going to last very long at my side as we raced off, but she ended up running the whole day and 23 miles distance.” 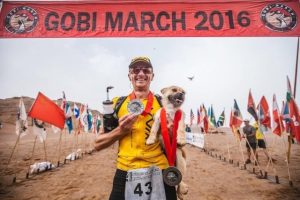 Back in the camp, the pup refused to leave her favorite runner’s side. It’s when Dion realized he’s part of the little one’s life, from now on. Since then, the two are inseparable. The athlete adopted the little one and now he calls her Gobi and takes her everywhere he goes. “Gobi picked me to be her pal for life, so I am doing what I can with some great support from around the world to make this happen,” the man said.

Find out more about this heart-melting story, here: