Elephants are known for their high intellect.

They are also highly social animals, who are flourishing in their herd. 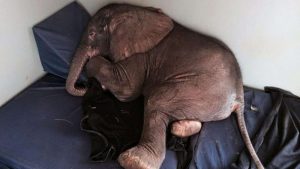 Meet Ellie, a little baby elephant, who was refused by his herd because of a chronic sickness. He had no chance to survive all alone in the wild.

Fortunately, the volunteers of the Rhino Orphanage rescued him and brought the poor baby to the sanctuary in Zululand, where he received special attention and care. 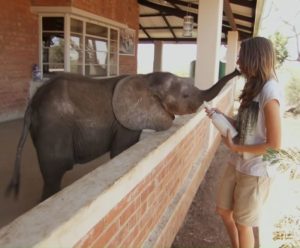 Though the orphanage was focused on caring for rhinos, Ellie was not turned away, even more, the staff did their best to invent a new milk formula, as he had an allergy to any kind of milk.

They used well-cooked rice and added minerals and proteins. So, Ellie slowly gained weight and strength, and he recovered from his illness, but one thing was anyway missing. He was very alone. 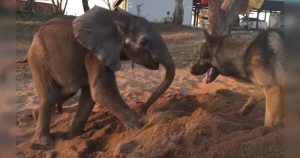 Ellie faced psychological issues having no opportunity to interact with his elephant family.

The staff didn’t know how to help the poor creature with his social needs.

But the support was very close. It was a former service dog, named Duma, who saved the sad elephant from his sorrow. 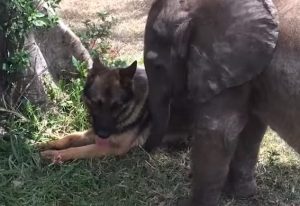 As soon as Duma arrived, they formed immediately a new friendship and became inseparable.

They were playing on the sand pile and liked to chase each other.

Ellie became cheerful and looked very happy. He found comfort in his new friend. Duma helped him to overcome his sorrow and loneliness.