Everyone at the shelter believed Ruby was destined for great things. Once she teamed up with state trooper Corporal O’Neil, she was able to realize her true purpose. A new Netflix movie releasing this month shares their amazing story!

Ever since he entered the police academy in 2004, Corporal Daniel O’Neil of the Rhode Island State Police dreamed of being a K-9 unit trooper. A dedicated dog lover while growing up, he understood the value hero dogs provide to help police on search and rescue missions, venturing into places even some humans can’t reach.

When selected as a unit member in 2011, O’Neil then spent years earning his canine trainer certification in human remains detection, area search and rescue for land and water retrievals, article and evidence detection, and tracking and trailing. Through it all has been Ruby, an Australian shepherd and border collie mix. When they first met, she was in need of a second chance.

“She was an absolute wreck,” O’Neil tells Daily Paws. “She hadn’t had a stable home for her first 8 months of life and was in desperate need of love and stability.”

Ruby was first surrendered to a shelter when she was about 4 months old. Staff members of the Rhode Island SPCA recalled in an American Humane interview that she was adopted and returned many times before she was a year old, always for the same reason: the pup was deemed “unmanageable.” So an SPCA volunteer, Patricia Inman, fostered Ruby each time. Always believing something more could be done to tap into her natural energy and focus, Inman worked hard to find her a forever home. This caught O’Neil’s attention.

“What really inspired me to take a chance on her was the belief my sergeant and the director of SPCA had in her at the time,” O’Neil says. “They knew with a little love and admiration she would pay it back tenfold. Even though some days were a roller coaster, with their support, they helped me realize her potential. Ruby deserved love and affection. In my home, she got it.”

With O’Neil, Ruby received gentle, consistent guidance and realization of her true purpose. Unlike other search and rescue or K-9 officers who are often raised from early puppdom with these specific jobs in mind, O’Neil had to establish a new foundation with Ruby—and she was a little defiant at first! “She didn’t know she could trust me. But she came around very quickly and settled right in,” O’Neil says. “She became the protector of our family, and motivated me to go to work every day.” 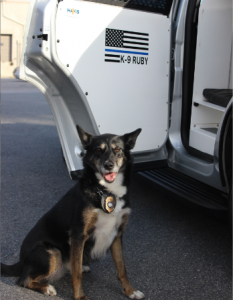 Partners for 10 years now, O’Neil and Ruby have made quite an impact. They’ve saved three lives, located countless missing people, solved murder cases, and uncovered numerous criminals. “Ruby has dedicated her life to serve the great state of Rhode Island and is doing a tremendous job at it,” O’Neil says. “She’s just a ball of fire that keeps me young!”

O’Neil loves her energy, and is confident she adds to his own motivation—in everything from their police work, to when she joined him on training runs for the Boston Marathon. He’s also taken her all over the country to advocate for shelter dogs and other pets to get their well-deserved second chance with a forever family. 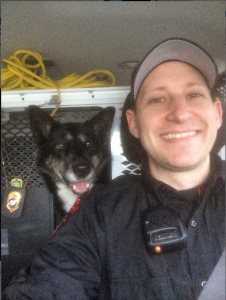 Ruby had been on the job for about six years when the K-9 unit received a call about a teenage boy from Gloucester, Rhode Island who’d been missing for 36 hours. This is a crucial time of recovery that required an all-hands search.

O’Neil and Ruby searched nearby hiking trails for hours. It was one of their toughest challenges so far. Then, at one point, Ruby dashed off into the woods. O’Neil repeatedly called out to her, but she wouldn’t come back. When he finally caught up with her, she was bent over a young boy on the ground, licking his face. Ruby discovered the missing teen, horribly injured by still alive.

Think you have goosebumps now? Here’s what will give you full-body chills: the boy who was lost was Patricia Inman’s son—the SPCA volunteer who believed the “unmanageable” Ruby was destined for greater things. Inman hadn’t seen Ruby since she started training with O’Neil 7 years before. Everyone believed this incredible twist of fate was nothing short of a miracle.

This led to Ruby’s nomination for the American Humane Hero Dog Award for Search and Rescue in 2018, which she went on to win. Toward the end of the award tribute video below, Ruby and Inman share a grand reunion after her son’s return. “Ruby came running over, and it was like a long-lost family member,” O’Neil says in the video. “Ears go down, tail starts wagging—it was like they had never been apart.” 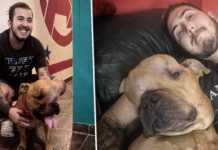 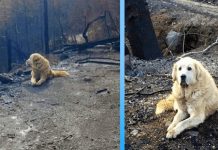 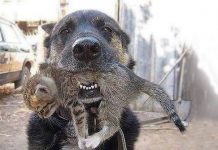 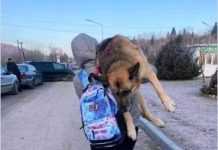 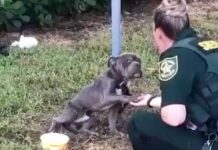 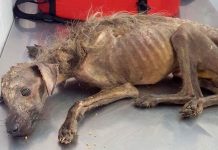