A dog that got stuck underground in a badgers’ sett for more than 60 hours has been rescued by firefighters.

Crews were called to Diamond Jubilee Wood in Normanton Le Heath, Leicestershire, at lunchtime on Tuesday.

The owner said it had been trapped for two and a half days.

Firefighters used specialist listening and locating devices and the RSPCA also went to the scene to ensure its welfare.

They managed to find the sound of the dog underground and drafted in more resources to dig it out.

Pictures from Leicestershire Fire and Rescue Service show the dog’s head emerging from the dirt and the animal lying sprawled on the ground after being freed. 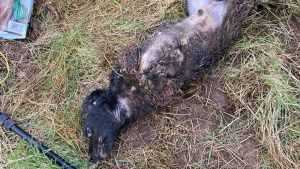 Firefighters said the dog was back with its owner and the RSPCA, while the badgers’ sett is believed to be non-active.

Setts are made up of a network of underground tunnels and entrances and larges ones can have several hundred meters of tunnels and enough space for about 30 badgers.