In an incredible display of affection and sympathy, a dog imitates his injured owner and goes viral. The pair became famous on social media after the owner shared the heartwarming moment online. However, what initially was a reason to worry for the man, proved to be nothing but an act of solidarity from the pooch. 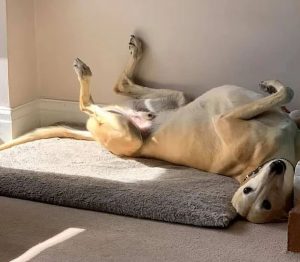 Russell Jones from London, England was forced to use crutches after he suffered an ankle injury. But when the man took his 8-year-old lurcher named Billy for a walk, noticed something strange. The dog started to limp all of a sudden. Worried, Jones rushed him to the vet to find out what happened to his dog. 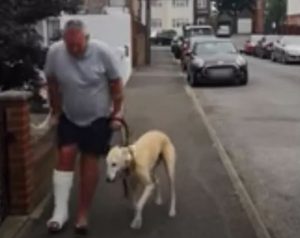 The concerned owner spent around £300 ($400) on scans and X-rays for Billy, but only to learn his dog was actually imitating him out of sympathy. And every time, they went for a walk together, the gentle Billy was limping just like his human friend. Anyway way, later that week, the lurcher was caught red-handed by Jone’s wife Michelle who spotted him sprinting around the backyard.

“He walked in normally, and when he came out they said they couldn’t find anything wrong with him,” Jones said. “Cost me £300 in vet fees and X-rays, nothing wrong just sympathy. Love him.” 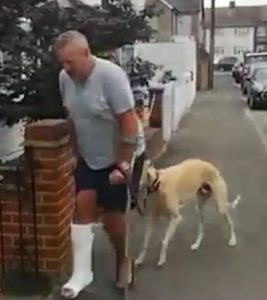 The lovely footage of Jones with his dog by his side copying him went viral on social media gaining lots of reaction from all over the world. “He’s copying you. That’s brilliant! Though you have my sympathy for the vet’s bill,” one person wrote. While another one added: “He’s come out in sympathy with you! Speedy recovery to both of you.”